Get Creative With Your Outdoor Advertising 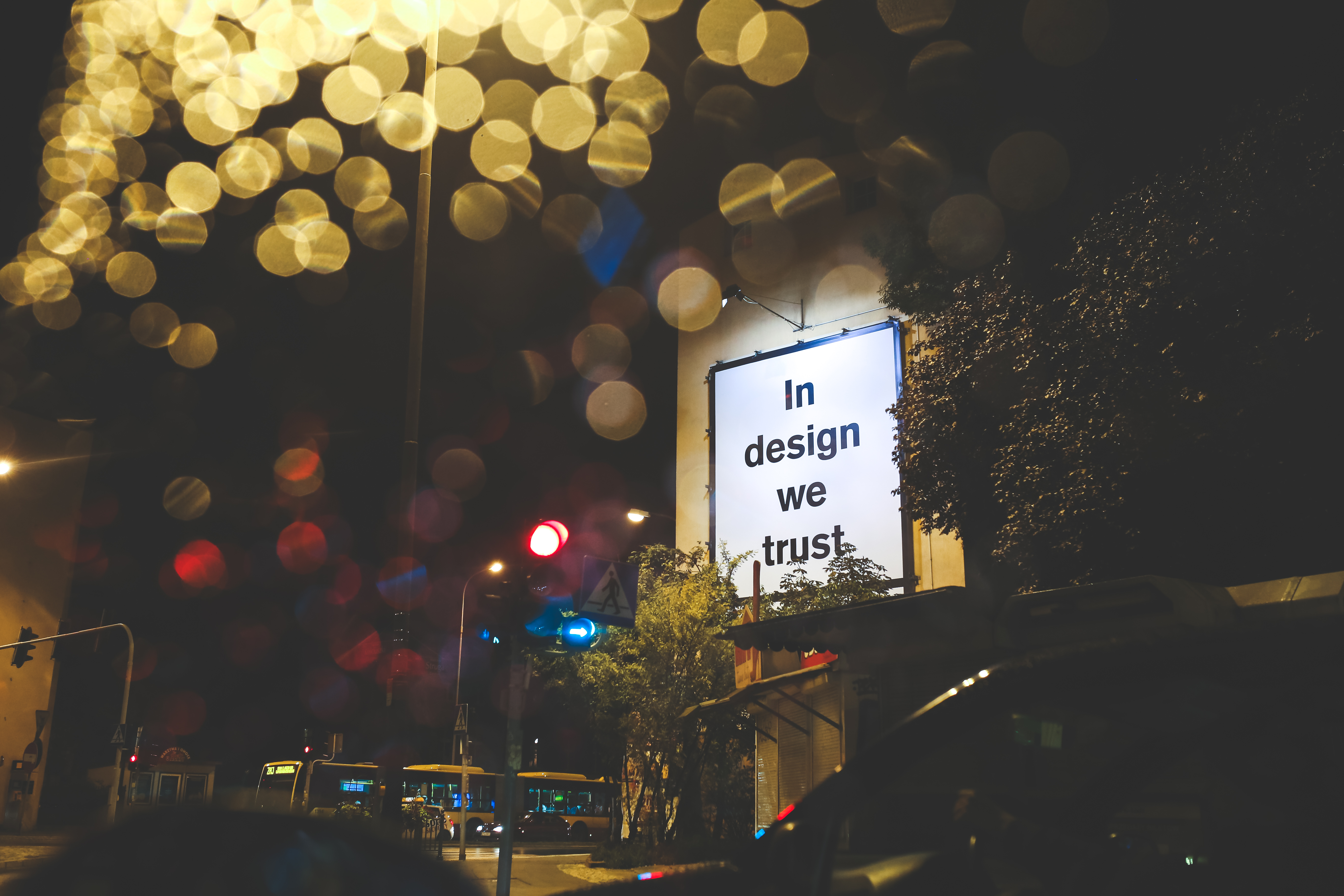 Outdoor advertising is everywhere. We’re used to it. When you drive on a highway, it would be weird not to see billboards flanking the road. When you’re standing at a bus stop or in the subway, it would be strange not to see the face of your local lawyer or insurance agent on the walls. Does that mean that outdoor advertising is a waste of time? It no longer interrupts our experience and isn’t that the point of advertising?

There are many debated pros and cons to outdoor media. Cons include brief exposure time, low visibility, and ads can only be seen in that one place. Pros include wide targets, specific locations and the ability to create an immediate impact.

I agree, regular billboards and park benches are now a part of our everyday visual canvas. They don’t do anything disruptive or spectacular as I drive by. But that’s just because they are average. The outdoor landscape is open-ended; no specifications, rules, or stipulations. Sure, it’s suggested that you use easy-to-read fonts, focus on contrasting colors, and don’t say anything rude or stupid (I mean, duh!). However, billboards don’t have specific dimensions; they don’t even have to be 2D. Street signs and park benches can be made to look like anything! Out of home advertising can even align with digital marketing efforts to further intersect a viewer’s routine and encourage interaction. With the additions of augmented realty and virtual reality, the sky is literally the limit. The challenge with outdoor advertising is that for it to work, it has to be different, but you can only go so far. While that can be intimidating, the challenge is exciting.

I’ve attached a list of four outdoor advertising efforts that were willing to push the limits and make a huge impact on passersby. 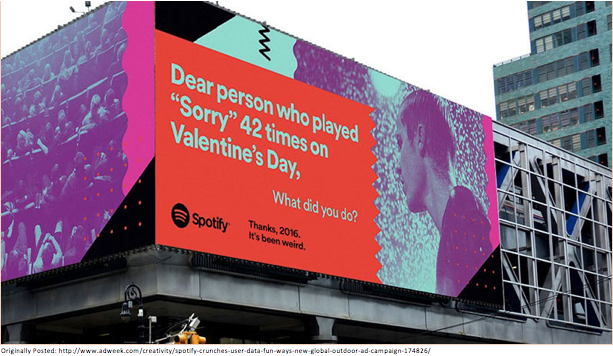 This was the campaign heard around the world in 2016. Taking from its user data, Spotify posted boards all around cities with unique quips and facts about Spotify usage. One poster read, “Dear person who played “sorry” 42 times on Valentine’s Day, what did you do?” Viewers found these hilarious and informative. Everyone was on the lookout for a stat about their Spotify usage, and thus, used the app more than ever. Snarky, witty, and larger than life, these outdoor ads had people talking about and using Spotify  – which is always the ultimate goal. At the end of each ad, all Spotify had to say was “Thanks 2016, it’s been weird.” 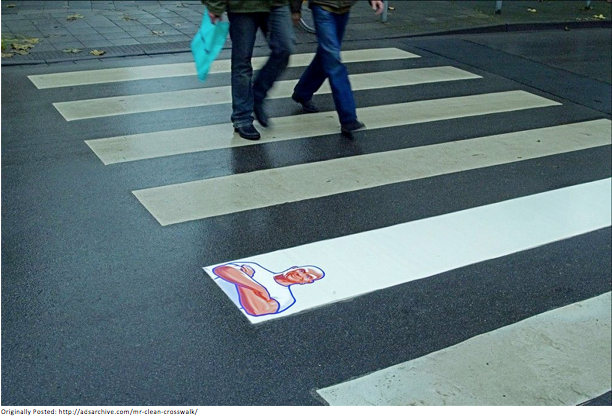 Pedestrians in Italy would walk across various crosswalks and catch a glimpse of an extremely white stripe compared to the other dingy, weathered ones. The bright, white stripe featured Mr. Clean smirking with his arms folded. This subtle, clever show of Mr. Clean’s superior cleaning ability made customers pay attention, smile, and feel the urge to go scrub their entire house! 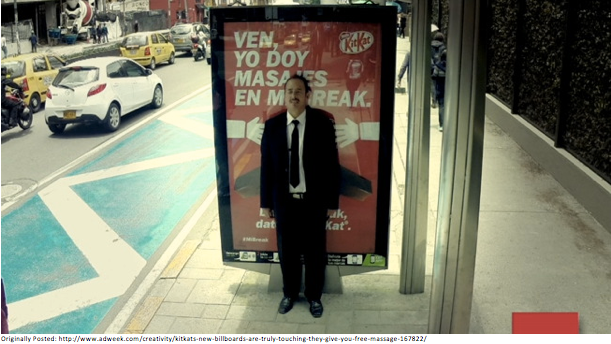 At the start of the “Have a Break” Campaign, KitKat installed signs that would vibrate when people leaned on them – giving them a quick massage in the middle of their busy workday. At first, these were slightly shocking, and maybe even a bit invasive. People soon realized they were lighthearted and even relaxing. Plus, it showed that KitKat really does want you to sit back, relax, and have a break! 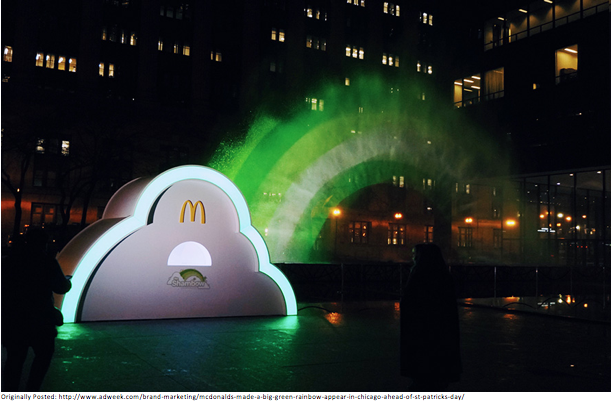 Just before St. Patrick’s Day 2018, McDonalds created a popup shop that gave out free Shamrock Shakes in Chicago along the Chicago River (a river that is dyed green every year to celebrate the holiday.) An artist created a rainbow made of water vapor, fog, and light projection that shot out next to the Shamrock Shake shop. The idea behind the stunt was to bring happiness and magic to an area that is typically synonymous with gloomy winters and a desperate anticipation for spring. Not only did the “Shambow, as people were calling it, bring attention to the delicious free McDonald’s shakes, but it again reminded viewers that happiness and warmer weather was right around the corner- in their local McDonald’s!

From 2D billboards and digital posters, to augmented reality and artistic light installations, outdoor advertising is only limited by your creativity (and maybe your budget!)